About Springfield Walks and Tours 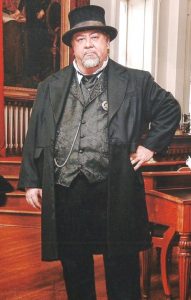 The company is owned by Garret Moffett who brings twenty years of experience in tourism having led tours throughout the Midwest, Britain, and Western Europe. Moffett is also an amateur historian having been involved in a wide range of historical projects through the years. Combining his love of history, his storytelling skills, and his experience as a tour guide, Moffett developed the first tour company of its kind in Springfield, Illinois and remains the premiere tour company in town today.

Moffett hails from Macomb, Illinois and held posts there such as Vice-President of the Western Illinois Regional Museum serving as an administrator over the collection which included artifacts such as a chest once owned by Marquee de Lafayette. He also designed and created museum exhibits that included Prohibition and WW II. In 2003 Moffett received the Community Quality of Life Award by the city for his work with the Western Illinois Archives to produce a historical video titled, The Macomb Story, which tells the story of the early pioneer settlement of Macomb and McDonough County. Moffett was also active in the McDonough County Historical Society and helped to locate and map every known burial site and cemetery within the county documenting 126 burial sites. Moffett began offering historical walking tours in Macomb that included pioneer history, cemetery walks, haunted history walks and Prohibition. In 2004 Moffett received the Illinois Lt. Governor’s Mainstreet Award for Best Historical Tourism Development over 52 other candidates in the state vying for the top award. 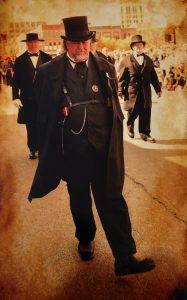 With the opening of the Abraham Lincoln Presidential Museum in Springfield Moffett recalled hearing strange and bizarre stories surrounding Lincoln’s life and death and created the Lincoln’s Ghost Walk: Legends & Lore and opened the company Springfield Walks in Springfield in 2005. The tour was an instant success and soon received an award for Best New Tourism Development by the Downtown Springfield Incorporated organization. The Lincoln Ghost Walk was also rated as the “3rd best activity” in Springfield by the New York Times.

Moffett soon began offering other walking tours such as Springfield’s Haunted History, Prohibition, other Lincoln walks, and Oak Ridge Cemetery walks. 2008 was the 100th anniversary year of Springfield’s infamous 1908 Race Riot and Moffett was recognized by the national press corps, such as the Washington Post, the New York Time, Chicago Sun Times, CNN, and others, for his 1908 Race Riot Walk  that commemorated the riot that led to the formation of the NAACP.

Springfield Walks still offers a variety of walking tours that rotate year to year based on the public’s interest.

With the success of the walking tours the company began to offer local tour guide services for visiting coach groups and student travel groups wanting to visit the Lincoln sites. The service soon expanded to offer tour guides for groups traveling on to Chicago and St. Louis, and now the company has guides available for most any US and some European destinations.

The company has also been a part of Springfield’s annual history Comes Alive program since it’s inception offering walking tours, giving presentations, and Moffett represents Ward Hill Lamon. He was Lincoln’s former law partner, they were best friends and he was a colonel during the war. Lincoln had given him an appointment as a US Marshal and Commandant of the Washington City jail, and he was Lincoln’s personal bodyguard but was not on duty that fateful night. During the History Comes Alive programs you can find Moffett dressed as a US Marshal somewhere in the vicinity of Abraham and Mary Lincoln with a watchful eye and suspicious of everyone!

Finally, Moffett is a published author having contributed to numerous historical articles in various newspapers and publications through the years, and two books, Haunted Macomb and Haunted Springfield, History Press. Both books offer a balance of local history and ghostly tales.

Springfield Walks & Tours bringing you all of the history and mystery that Lincoln’s Springfield has to offer!

All of our fall tours will follow CDC and State of Illinois COVID guidelines for everyone’s health and safety as much as possible. Masks and hand sanitizer will be provided.